Instead, Ivey attended a Birmingham Barons minor-league baseball game, where she threw out the first pitch, the Birmingham News reported. The governor claimed via Twitter that the team had invited her to attend Thursday’s game “earlier this year.” 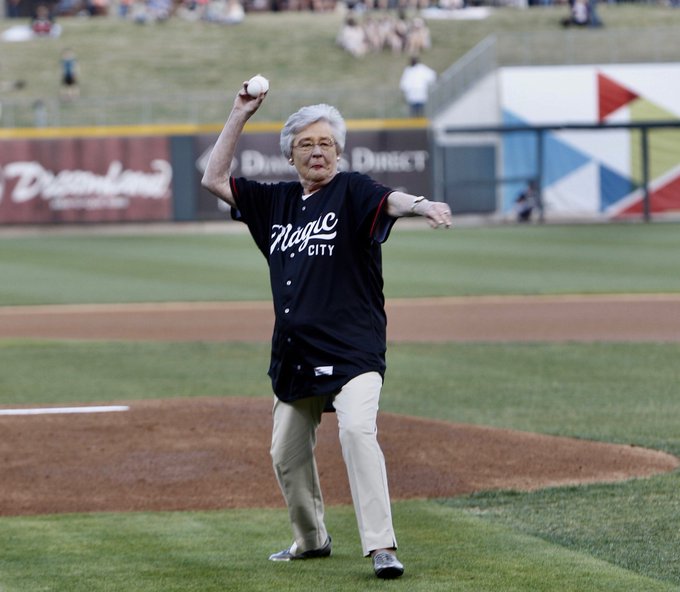 Great to be in the Magic City tonight to throw out the first pitch for the Barons-Biscuits game! Let’s play ball!

“This isn’t a student government election,” Huntsville Mayor Tommy Battle said. “This is an election about what is going to happen to the state of Alabama for the next four years. If you can’t come out and give people your vision, your reasons, what you want to see happen, then you’re not a public servant.”

State Sen. Bill Hightower of Mobile, who served under the Gov. Ivey, said she never visited the state Legislature during the 2018 session.

“Look, I sat in the Senate and saw the incredible lack of leadership across the street in the Capitol,” he said. “And that is the reason I’m running.”

“Are we hiding something?” evangelist Scott Dawson asked.

Throughout Thursday’s debate, the challengers continually integrated Ivey’s absence into their responses to questions.

During a question about improving Alabama’s roads, Battle said Ivey needs to “ride on those roads” rather than riding in jets “across those roads.”

Battle added during closing comments, “It’s unfortunate one of us is not here, watching a baseball game rather than talking about what needs to happen in this state.”

According to the Birmingham News, Ivey turned down an invitation to participate in another debate next week. The paper reported that her campaign has thus far not submitted alternative dates for when she can attend.

A 100 day pause on deportation of …by Tbag10 hours ago

The Capitol-area security fencing …by Tbag11 hours ago

Seattle protesters oppose Biden a …by Tbag12 hours ago

Joe Exotic says he was ‘too gay’ …by Tbag12 hours ago

Why did Amazon wait until Biden’s …by Tbag13 hours ago

FBI releases new wanted poster of …by Tbag13 hours ago

135 civil rights groups speak out …by Tbag14 hours ago

A 9 year old Philadelphia girl di …by Tbag14 hours ago

Ramsey Nouah Spotted With Tunde E …by Holly1 day ago

Recommended
Juventus fans abuse Michael Oliver on Twitter, not the real one though
13 April Juventus fans have launched a tirade of abuses on…
Cresta Posts Box by CP