Russian officials warned of “consequences” after President Donald Trump announced his approval of U.S.-led military strikes in Syria against the Russian-backed regime of Bashar al-Assad.

Putin called the strike a “destructive influence on the entire system of international relations” and said Moscow would call for an emergency meeting of the U.N. Security Council.

Russian President Vladimir Putin alongside Syrian President Bashar al-Assad during a visit the Hmeymim air base in Latakia Province, Syria on Dec. 11, 2017.  (Reuters)

Syrian air defense units shot down 71 out of 103 cruise missiles launched by the U.S., Britain and France, the Russian military claimed Saturday.

Russia’s Defense Ministry had earlier asserted that none of the missiles launched by the U.S. and its allies entered areas protected by Russia’s missile defense.

Col. Gen. Sergei Rudskoi of the Russian military’s General Staff said Saturday that the Syrian military used a Soviet-made missile defense system to shoot down all the missiles targeting four key Syrian air bases. He added that there were no casualties from the strike and its targets suffered only minor damage.

Rudskoi said Russian air defense assets in Syria monitored the strike, but didn’t engage. He also noted that while Russia had refrained from supplying Syria with its state-of-the-art S-300 air defense missile systems, that could be reconsidered now.

Prior to Putin’s statement, other Russian officials issued grim reactions to the Western military effort. 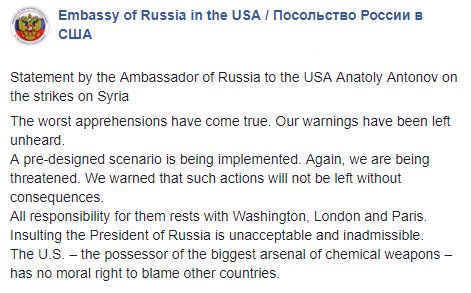 Statement by the Ambassador Antonov on the strikes on #Syria:
A pre-designed scenario is being implemented. Again, we are being threatened. We warned that such actions will not be left without consequences.
All responsibility for them rests with Washington, London and Paris.

“The worst apprehensions have come true,” Anatoly Antonov, Russia’s ambassador to the U.S., tweeted Friday. “Our warnings have been left unheard.

“A pre-designed scenario is being implemented,” Antonov said. “Again, we are being threatened. We warned that such actions will not be left without consequences. All responsibility for them rests with Washington, London and Paris.

“Insulting the President of Russia is unacceptable and inadmissible,” he said. “The U.S.—the possessor of the biggest arsenal of chemical weapons—has no moral right to blame other countries.”

“Insulting the President of Russia is unacceptable and inadmissible. The U.S. — the possessor of the biggest arsenal of chemical weapons — has no moral right to blame other countries.”

Maria Zakharova, spokeswoman for Russia’s Foreign Ministry, denounced the U.S. in a Facebook post Friday for the strikes on Syria — a country that, she wrote, “for many years has been trying to survive terrorist aggression.”

“The White House stated that its assuredness of the chemical attack from Damascus was based on ‘mass media, reports of symptoms, video, photos as well as credible information,’” she wrote. “After this statement the American and other Western mass media should understand their responsibility in what is happening.”

Russia and the U.S. had disagreed over a proper response in Syria after a suspected chemical attack by the regime last weekend in rebel-held Douma, a town about 10 miles east of Damascus, killed at least 40 people and injured more than 500, mostly women and children. The attack occurred amid a resumed offensive by Syrian government forces after the collapse of a truce.

Earlier Friday, Russia’s foreign minister, Sergei Lavrov, told reporters in Moscow that the claims of the suspected gas attack were a fabrication.

“Intelligence agencies of a state that is now striving to spearhead a Russo-phobic campaign were involved in that fabrication,” Lavrov said, without elaborating or naming the state.

A Russian lawmaker claimed the strikes were aimed at disrupting the work of international investigators looking into whether Syria used chemical weapons in the town of Douma.

“The airstrikes were carried out by the U.S.-led coalition consciously to spoil the investigation,” Russian parliament member Dmitry Sablin was quoted by the Interfax news agency as saying.

Alexander Sherin, deputy head of the State Duma’s defense committee, likened Trump to Adolf Hitler, and considered the strikes to be a move against Russia.

Trump “can be called Adolf Hitler No. 2 of our time — because, you see, he even chose the time that Hitler attacked the Soviet Union,” state news agency RIA-Novosti quoted Sherin as saying.

The strike came hours after Trump’s U.N. ambassador, Nikki Haley, told an emergency meeting of the Security Council that “the United States estimates that Assad has used chemical weapons in the Syrian war at least 50 times.”

Haley said during the meeting that should the U.S. and its allies decide to act in Syria, it would in the defense of “a bedrock international norm that benefits all nations” from the use of chemical weapons.

Russia’s military on Friday again refuted the claim that chemical weapons had been used in Douma, citing a lack of evidence.

“According to the results of a survey of witnesses, studying samples and investigating locations undertaken by Russian specialists and medical personnel in the city of Douma, where chemical weapons purportedly were used, the use of poisonous substances was not shown,” said Maj. Gen. Yuri Yevtushenko, head of the Russian center for reconciliation of the warring parties in Syria.

Yevtushenko also said the Russian military would supply security for investigators from the Organization for the Prohibition of Chemical Weapons as they worked to determine whether chemical weapons had been used.

Russia’s Defense Ministry said earlier Thursday that Douma was under the control of Syrian forces and that some 1,500 fighters of the Army of Islam group had left the city.

Yevtushenko said that the action was to “prevent provocations, guarantee security, for the support of law and order and organize aid for the local population.”

Naira Marley reacts after school …by Chefee8 mins ago

rapper, Cardi B reacts after Nige …by Chefee15 mins ago