At least one person was dead and five others were injured after a nearly 2,000-foot TV station tower collapsed in Missouri on Thursday. 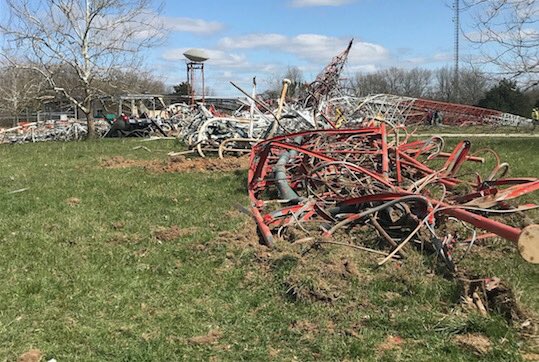 Fire and emergency crews raced to the scene of the morning collapse in Fordland. It was not immediately clear why the tower fell. The Logan-Rogersville Fire Protection District confirmed the fatality.

Crews were working on the tower when it fell, KTTS reported. The workers were about 105 feet up at the time of the collapse. One of the workers became trapped under the tower and was killed while five others were injured. None of the injuries were said to be life-threatening, the Springfield News-Leader reported.

The tower, which was said to be 1,891 feet tall, was toppled to the ground, pictures of the scene showed.

The tower was used by KSMU and Ozarks Public Television for broadcasting, the Springfield News-Leader reported.

This is a developing story. Check back for updates.

Nigerian man jailed for leaking v …by Chefee24 hours ago

Philadelphia police searching for …by Tbag1 day ago

PA woman accused of stealing lapt …by Tbag1 day ago