House Majority Whip Steve Scalise was released from the hospital Saturday after undergoing a planned surgery related to injuries he sustained when he was shot last yearat a Republican baseball practice.

The Louisiana congressman’s office and MedStar Washington Hospital Center confirmed that he had been discharged and “the planned surgery was successful.” 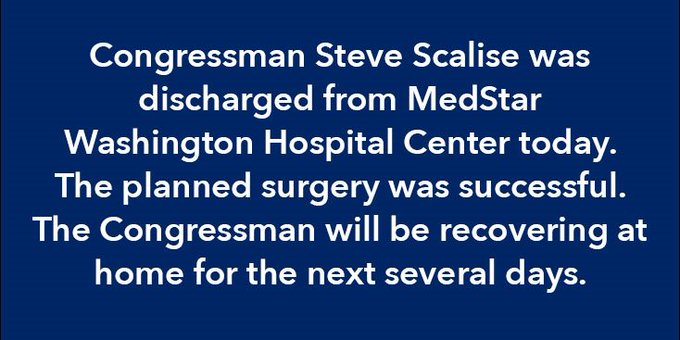 “The Congressman will be recovering at home for the next several days,” the hospital said in a tweet.

Rep. Scalise: You can’t underestimate the power of prayer

Scalise, 52, was critically wounded in June 2017 after a gunman opened fire during a GOP baseball practice. Four others were also wounded in the incident. The team was preparing for a congressional baseball game taking place at Nationals Park.

The congressman’s team and the hospital confirmed on Monday that Scalise had “initiated a series of planned, inpatient procedures related to his ongoing recovery from injuries sustained in last summer’s shooting attack.” 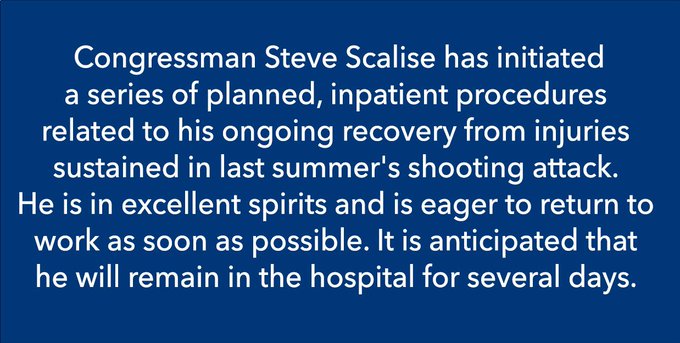 They added that Scalise was likely to receive hospital care for several days but said he was “in excellent spirits” and was “eager to return to work as soon as possible.”

The lawmaker also informed his colleagues via email that he was having a “follow-up procedure.”

“I’m blessed to have made tremendous progress in my healing, and am grateful for your continued support,” Scalise wrote. “Rest assured that I plan to be fully engaged in my work as I recover from this surgery, and I am eager to be back at the Capitol as soon as my doctors say I’m able.”

Mike Emanuel and The Associated Press contributed to this report.