Residents in the San Francisco Bay Area are living along a fault that is a “ticking time bomb” that could generate an earthquake that could kill hundreds, according to a report released Wednesday.

The U.S. Geological Survey said in a report called the “HayWired Scenario” that a magnitude 7.0 earthquake on Hayward Fault located under Oakland could kill as many as 800 people and injure up to 18,000.

“This fault is what we sort of call a tectonic time bomb,” USGS earthquake geologist emeritus David Schwartz told the Los Angeles Times. “It’s just waiting to go off.”

Researches said the Hayward Fault is dangerous because it runs through “one of the most urbanized” areas in the nation, stretching along the East Bay from Richmond and Berkeley up north, through Oakland, and spanning south toward Fremont.

A map showing the potential shaking from an earthquake along the Hayward Fault, located along the eastern part of the San Francisco Bay.  (USGS)

The USGS, citing findings from a simulated tremor with an epicenter in Oakland modeled to take place at 4:18 p.m. on April 18, said the disaster would cause 400 fires that could destroy 50,000 homes. Nearly half a million people would be displaced, authorities said.

Researchers said East Bay residents could be without water from anywhere between six weeks to six months, according to the report. Electricity could be out for up to four weeks in some locations. 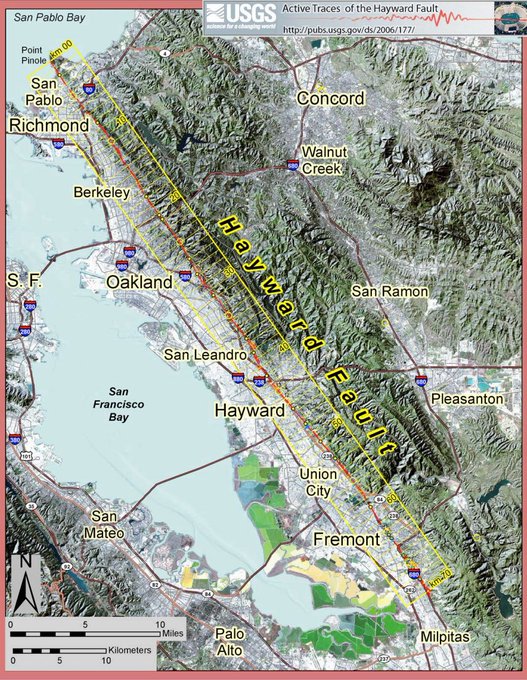 The HayWired earthquake scenario, led by the USGS, anticipates the impacts of a hypothetical magnitude-7.0 earthquake on the Hayward Fault.

Jack Moehle, a professor of structural engineering at the University of California at Berkeley, told KTVU the study shows that people need to get ready for the “big one.”

“Preparedness for the inevitable earthquake is really important and that preparedness comes first at home and the workplace,” he said. “But preparedness also occurs in how we build our buildings.”

Researchers released the study the day before the 112th anniversary of the 1906 San Francisco earthquake that struck along the San Andreas Fault, located under the western part of Bay Area. That quake killed up to 3,000 people.

The skyline of Oakland, Calif., which is located near the Hayward Fault that runs along the eastern part of the San Francisco Bay Area.  (REUTERS/Stephen Lam)

California is located along the volatile “Ring of Fire” seismic fault system.

More than half the world’s active volcanoes located above ground are in this ring, according to the USGS.

A map showing the “Ring of Fire,” where more than half of the world’s active volcanoes above sea level encircle the Pacific Ocean  (UGSG)

The region is the location of most of Earth’s subduction zones, where oceanic plates slide under the lighter continental plates. Earthquakes tend to happen when those plates scrape or subside underneath each other, and, when that happens at sea, it can trigger tsunamis.

Conor Mcgregor And His $1m Astron …by Tbag12 hours ago

About Diabetesby Tbag12 hours ago

A Mother And Her Two Children Bur …by Tbag17 hours ago

Funmi Olorunnipa Badejo has been …by Tbag18 hours ago

Nigerian mom celebrates as she ta …by Chefee20 hours ago

Woman finally weds her lover afte …by Chefee20 hours ago

Recommended
From UK: Wenger to be offered PSG presidential role
22 April According to the latest reports from British tabloid…
Cresta Posts Box by CP