Police in Toronto identified the suspected driver of a van that rammed into a crowd of pedestrians earlier Monday, and said they would not rule out terrorism as a possible motive.

The vehicle was driven by Alek Minassian, 25, of Richmond Hill, north of Toronto, police said. Minassian allegedly drove into dozens of people intentionally, killing 10 and injuring 15 others.

“We don’t rule out anything,” Toronto Police Service Chief Mark Saunders said in a Monday evening news conference. “We need to follow what we have.

“Based on witness accounts, its very clear the actions definitely looked deliberate,” Saunders said. He said the suspect had not been known to police previously.

After striking the pedestrians, Minassian sped off, CBC reported. Witnesses said the driver was moving fast and appeared to be acting intentionally. Photos from the site of the collision showed people trying to help victims on the ground and multiple bodies covered by sheets. 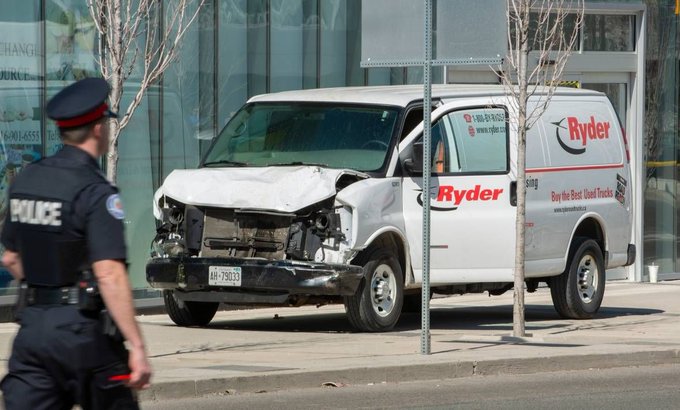 A witness who identified himself as Nick said he was studying when he saw a truck “flash by” in the area. He said he “witnessed a few people pass away in front” of him as others screamed.

Alex Shaker, who witnessed the incident, said the van was speeding down the street before it mounted the curb and plowed into people.

“He started going down on the sidewalk and crumbling down people one by one,” Shaker told CTV. “He just destroyed so many people’s lives. Every single thing that got in his way.”

Video broadcast on several Canadian outlets showed police arresting the driver, dressed in dark clothes, after officers surrounded him and his rental Ryder van several blocks from where the incident occurred in the North York neighborhood of northern Toronto. He appeared to make some sort of gesture at the police with an object in his hand just before they ordered him to lie down on the ground and took him away.

Saunders asked for members of the public capable of helping to come forward. Law enforcement, Saunders said, needs help in both identifying the victims and with piecing together the actions of the day via eyewitness accounts. “We’re still looking for more witnesses,” Saunders said.

“This is very early in the investigation,” he continued. “We need every single piece of this puzzle that we can.”

“This kind of tragic incident is not representative of how we live or who we are,” Toronto Mayor John Tory said.

“We are with the Canadian people tonight as they grieve the loss of life & injured,” Vice President Mike Pence tweeted. “The American people stand shoulder-to-shoulder with our neighbors in Canada.”

Asked for additional details on Minassian, Saunders deflected. “I can’t give you anything right now.” Officers who work the day shift are continuing to work into the night, Saunders said.

“The investigation is ongoing.”

Katherine Lam and The Associated Press contributed to this report.