The suspect believed to be the notorious Golden State Killer — who was wanted in a dozen murders and nearly 50 rapes from the late 1970s to the mid-1980s — has been arrested in California, officials said Wednesday.

Joseph James DeAngelo, 72, was arrested early Wednesday at his Citrus Heights home, located 16 miles northeast of Sacramento, after a DNA sample matched that of the Golden State Killer, officials said at a news conference. 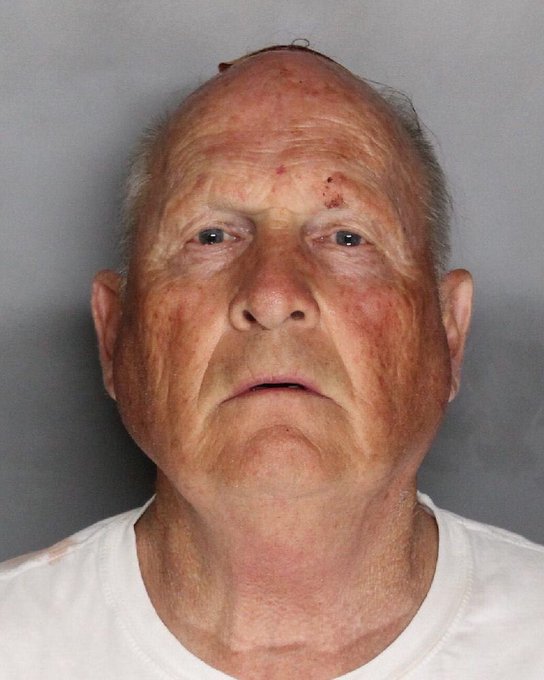 County records show DeAngelo is being held at the Sacramento County Main Jail, where he was booked on two counts of murder and is reportedly on suicide watch.

“We knew we were looking for a needle in a haystack, but we also knew that needle was there,” Schubert said, noting that despite thousands of tips throughout the years, DeAngelo’s name hadn’t been on authorities’ radar until last week. “We found the needle in the haystack and it was right here in Sacramento.”

Sacramento County Sheriff Scott Jones referred to the genetic material as “discarded DNA,” but authorities refused to give specifics about how it was collected or matched to the suspect.

The Golden State Killer, who was arrested on suspicion of committing four killings in Sacramento and Ventura counties, is believed to be responsible for at least 12 murders, 45 rapes and 120 home burglaries throughout California.

A car is backed out of the garage of a home searched in connection with the arrest of a man on suspicion of murder, Wednesday, April 25, 2018, in Citrus Heights, Calif.  (AP Photo/Rich Pedroncelli)

The cold-case killer is believed to have raped 37 people around Sacramento and Central Valley and killed two between 1976 and 1978, according to The Sacramento Bee. Officials believed he moved to the Bay Area and Southern California from there.

DeAngelo worked as an officer with the Exeter Police Department from 1973 until 1976. He was fired from the Auburn Police Department in 1979 after he was arrested for stealing a can of dog repellant and a hammer from a drug store, according to Auburn Journal articles from the time.

Jane Carson-Sandler, who is believed to have been raped by the Golden State Killer, also known as the “East Area Rapist,” told South Carolina’s The Island Packet on Wednesday she was contacted by authorities about his possible arrest.

“I just found out this morning,” she told the newspaper. “I’m overwhelmed with joy. I’ve been crying, sobbing.”

Interest in the cold case was renewed following the release of the late author Michelle McNamara’s crime novel, “I’ll Be Gone In The Dark.”

Michelle McNamara and Patton Oswalt in 2012. McNamara died in 2016.  (Berliner/ABImages via AP Images)

McNamara’s husband, actor Patton Oswalt, and her friend, Billy Jensen, published the book after her death. It reached No. 1 on The New York Times’ best-seller list last month.

Sacramento County Sheriff Jones on Wednesday credited McNamara’s book for keeping the Golden State Killer case public, but noted that “no information extracted from that book…directly led to the apprehension” of DeAngelo.

Oswalt countered on Twitter, saying that her book “did” help the case, but said that his late wife “didn’t care about getting any shine on herself. She cared about the #GoldenStateKiller being behind bars and the victims getting some relief.”

It did, but #MichelleMcNamaradidn’t care about getting any shine on herself. She cared about the #GoldenStateKiller being behind bars and the victims getting some relief. She was Marge Gunderson in FARGO, not Chilton in SILENCE OF THE LAMBS. https://t.co/krMOWaWh9m