A pit bull brought aboard a New York City subway train last week bit down on the shoe of a woman who had gotten into an argument with the dog’s owner, prompting a carload of passengers to rush to her aid, a video shows.

The video shows the animal tearing into the shoe and refusing to let go. A couple of passengers try to yank the woman’s leg from the dog’s jaw, while others scream at the animal’s owner.

“Get the dog off of her,” one rider shouts.

“Call the police,” another passenger yells.

“You’re going to jail now,” another rider yells. “And [the dog is] going to get euthanized.”

The owner eventually wrestles his dog away from the woman, taking her shoe off with it. The end of the video shows the owner picking up the shoe and throwing it toward the woman, but instead hitting another passenger who had been yelling at him.

The dog owner can be heard in the video telling the other riders that “she attacked me first.” 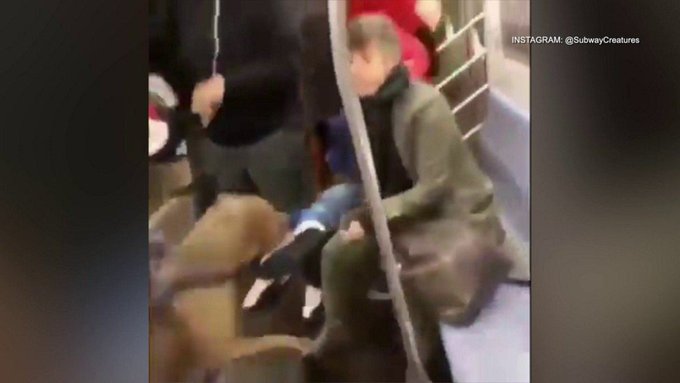 According to Tahsyi King, who filmed the encounter, there was a verbal and physical exchange before he began recording.

The dog had bumped a female passenger multiple times while she was already seated in the car, King told WNBC-TV. The woman asked the owner to move his dog several times and allegedly touched it, which led to an argument.

“The third time, he leans, punches her right on her face,” King told the station. “She seen it coming because she hit him back.”

The incident took place on the No. 4 subway line, but the time and place remained unclear. The parties involved have not yet been identified.

The Metropolitan Transportation Authority (MTA) told WPIX-TV that the incident was “disturbing” and “a clear violation of our rules.”

“No person may bring any animal on or into any conveyance or facility unless enclosed in a container and carried in a manner which would not annoy other passengers,” MTA rules state. The rule does not apply to service dogs.

The agency said it has flagged the video for the police to investigate.

GET OFF NOWby chirpy24126 hours ago

see my stepsister photos good dam …by kikofikra20 hours ago

Naira Marley reacts after school …by Chefee21 hours ago

rapper, Cardi B reacts after Nige …by Chefee21 hours ago