Two New Jersey police officers — who remained calm and professional while a former Hillary Clinton financial adviser ranted and raved during a routine traffic stop last month — are being lauded for their “verbal judo” during the tense interaction.

The Port Authority commissioner had some choice words for these New Jersey cops. http://nj-ne.ws/F7HjDcF 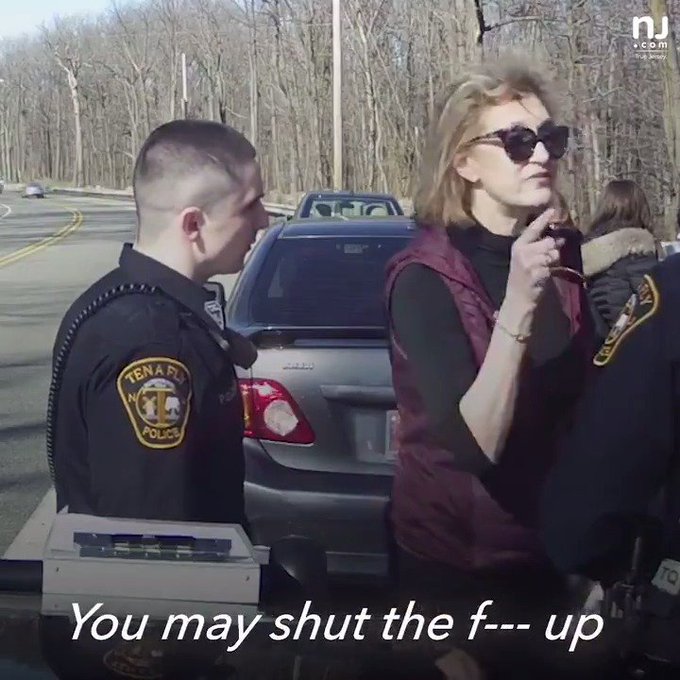 The Tenafly cops, who appeared in a March 31 dashcam video that went viral this week, have been identified as Officers Matthew Savitsky and Tom Casper.

Their handling of a confrontation with Caren Z. Turner, 60, a now-former commissioner of the Port Authority of New York and New Jersey, has drawn praise from across the U.S., their boss says.

“I’m very proud of the officers,” Tenafly police Chief Robert Chamberlain said. “Messages are coming in from as far away as Texas, Michigan and South Carolina, praising them and wanting them to be commended.”

“I’m very proud of the officers. Messages are coming in from as far away as Texas, Michigan and South Carolina, praising them and wanting them to be commended.”

Turner resigned from her Port Authority job soon after the video went public.

The video shows Turner being verbally abusive toward the officers, saying at one point, “You may not tell me when to take my child. You may shut the f— up and not tell me when I may take my kid and her friends, who are Ph.D. students from MIT and Yale.”

It all started when the officers pulled over a vehicle in which Turner’s daughter had been riding with some friends.

The officers decided to impound the vehicle because the driver could not provide proof of updated insurance or registration, NorthJersey.com reported.

Turner, who was called to the scene by her daughter, took over the negotiation with the officers.

During the exchange with the officers, Turner appears increasingly hostile in the video as she boasts of her rank, demands they call her “commissioner” rather than “miss,” and threatens to complain to their boss.

Yet the officers remain calm and polite throughout the unpleasant ordeal.

On Wednesday, Turner apologized for her behavior.

“I let my emotions get the better of me and regret my tone toward the police officers and use of off-color language,” she said in a written statement.

“I let my emotions get the better of me and regret my tone toward the police officers and use of off-color language.”

Turner also denied violating the Port Authority’s Code of Ethics, insisting that she did not use her position “to affect the outcome of the violations issued to the driver.”

Her former bosses at the Port Authority, however, apparently disagreed.

“The video speaks for itself,” PA officials said, adding that Turner’s conduct was “indefensible” and “outrageous.”

Meanwhile, Turner’s brandishing of a Port Authority badge during the confrontation, and boasted of her credentials, has prompted the agency to consider ending the use of badges for its non-law enforcement officials, New Jersey radio station WPG 104.1 FM reported.

A Port Authority spokesman told the Townsquare News Network that the badges have no meaning beyond identification.

Philadelphia police searching for …by Tbag4 hours ago

PA woman accused of stealing lapt …by Tbag4 hours ago

Texas police officer said he had …by Tbag6 hours ago