In a dramatic early Friday announcement, North and South Korean leaders agreed to a framework that could finally bring peace to the peninsula and potentially end decades of tension between the Hermit Kingdom and the global community.

The joint announcement that both sides will work toward a “nuclear-free Korean Peninsula” and try to officially end the Korean War came after a historic meeting between South Korean President Moon Jae-in and North Korea’s Kim Jong Un — who, fewer than four months ago, threatened the United States with nuclear weapons.

But the same Kim Jong Un who declared in a stark New Year’s address that a nuclear launch button is “always on my table” continued his recent — and surprising — push for peace during his meeting with Moon. 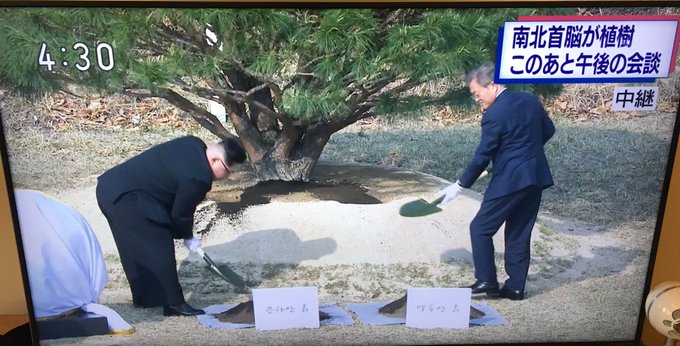 Kim and Moon plant a tree

While it was not immediately clear what concrete steps the countries would take to achieve the lofty goals set forth Friday, both nations agreed to hold further high-level talks and other negotiations, including a push for joint talks with the U.S. and also potentially China.

The Koreas, which have technically remained at war since the 1950-1953 Korean War was only stopped via an armistice, have agreed to stop all hostile acts over “land, sea and air” that can cause military tensions and clashes. 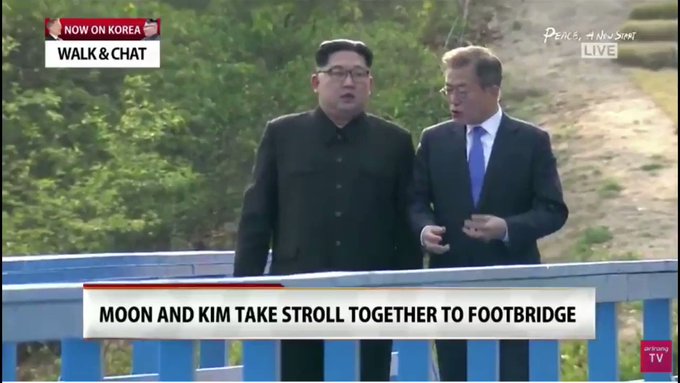 President Moon and Kim Jong Un held private conversation at the footbridge (도보다리) for over twenty minutes. If only we could hear what they were saying…#interkoreansummit

The two leaders announced that starting May 1, all loudspeaker propaganda broadcasts that have been blaring at each other across their heavily-armed border will be suspended. They will also dismantle broadcasting equipment and stop flying propaganda leaflets across their border.

Earlier Friday, Kim told Moon that he feels like he’s “firing a flare at the starting line in the moment of [the two Koreas], writing a new history in North-South relations, peace and prosperity.”

It was the first time a member of the Kim dynasty was known to set foot on South Korean soil since 1953. The two men shook hands and smiled for news cameras.

Kim and Moon planted a pine tree together as a symbol of peace before resuming their second meeting of the summit. They also unveiled a stone plaque placed next to the tree that was engraved with a message saying “Peace and Prosperity Are Planted.”

The summit has drawn measured responses from around the world.

“After a furious year of missile launches and Nuclear testing, a historic meeting between North and South Korea is now taking place. Good things are happening, but only time will tell!” tweeted President Trump, whose own fiery rhetoric and aggressive posture are credited by some analysts with helping to bring North Korea to the bargaining table.

“I am very encouraged by what’s happening,” Johnson told reporters Friday. “I don’t think that anybody looking at the history of North Korea’s plans to develop a nuclear weapon would want to be over-optimistic at this point.”

China has welcomed the summit, saying it applauds the countries’ leaders for taking a “historic step” toward peace.

The Associated Press contributed to this report