The Cambridge Police Department on Saturday said it launched an internal probe after video appears to show officers tackle and and punch a black Harvard student who was naked as they arrested him on Friday night.

Police claim that the use of force was warranted to arrest Selorm Ohene, 21, who they say was aggressive and high on drugs at the time, The New York Times reported.

The student reportedly remains in a hospital under police watch. He was charged with indecent exposure, disorderly conduct, assault, resisting arrest and assault and battery on ambulance personnel.

A video of the incident was released Sunday amid outcry regarding the officers’ conduct. Witnesses accuse the police of acting without provocation.

The footage appears to show several police officers standing in circle around Ohene. An officer appears to grab the student’s legs from behind, prompting both of them to fall. Ohene is reportedly heard crying and one officer is seen punching the man. Police said one of the officers punched Ohene five times in the stomach.

“We demand that the officers who assaulted this man while he was naked, fully subdued and bleeding on the ground be investigated and held accountable.”

“We demand that the officers who assaulted this man while he was naked, fully subdued and bleeding on the ground be investigated and held accountable,” the group said in a statement, according to the Times.

Drew Faust, the president of the university, said that although she does not yet know all the facts, the incident is “profoundly disturbing.” 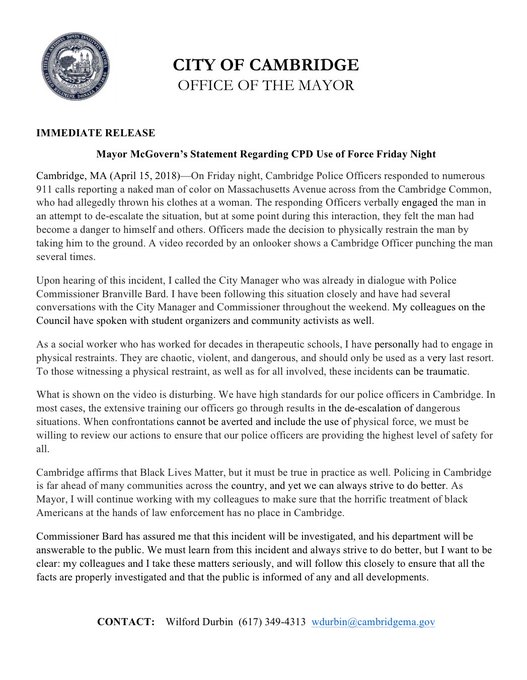 Statement from Mayor McGovern regarding the unfortunate incident this past Friday night involving a Harvard student and the #CambMA Police:

Cambridge Mayor Marc C. McGovern called the incident “disturbing” and said in a statement Sunday that “that the horrific treatment of black Americans at the hands of law enforcement has no place in Cambridge.”

“You have to judge their actions within the context of a rapidly evolving situation and not within an ideal construct,” Bard continued. “We operate in a practical world.”

Nigerian man jailed for leaking v …by Chefee23 hours ago

Nigerians react as video of Toyin …by Chefee23 hours ago

Philadelphia police searching for …by Tbag1 day ago

PA woman accused of stealing lapt …by Tbag1 day ago

Texas police officer said he had …by Tbag1 day ago