A dog in Australia proved its loyalty after sticking by a 3-year-old girl for an entire night after she got lost in the bushlands of Australia on Friday.

The girl, named Aurora, had wandered off from her home in Warwick, located about 105 miles southwest of Brisbane, prompting a search involving more than 100 people, ABC News reported.

Aurora was found at 8 a.m. the next day with the dog named Max, a 14-year-old Australian Cattle Dog who is deaf and partially blind.

State Emergency Services area controller Ian Phipps told ABC News the pair were found just over a mile from the house, but still on the family property.

Max has now been declared an honorary police dog.  (Twitter/@QldPolice)

“The area around the house is quite mountainous and is very inhospitable terrain to go walking in, so she’d traveled quite a distance with her dog that was quite loyal to her,” Phipps said.

Leisa Bennett, Aurora’s grandmother, told ABC News she shouted out to her granddaughter while searching on Saturday morning and faintly heard her responding.

“I shot up the mountain and when I got to the top, the dog came to me and led me straight to her,” she said.

Queensland Police praised Max’s efforts Saturday on Twitter, saying the dog is now an honorary member of the force. 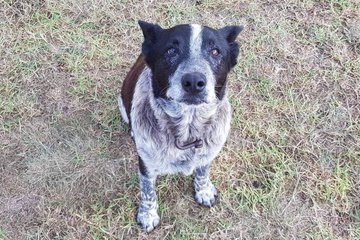 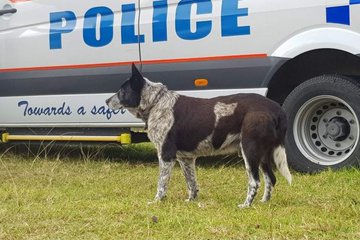 SUCH A GOOD BOY, MAX! He stayed with his 3-year-old human who was lost near Warwick last night while we frantically searched for her. For keeping her safe, you’re now an honorary police dog.

“SUCH A GOOD BOY, MAX! He stayed with his 3-year-old human who was lost near Warwick last night while we frantically searched for her,” police said. “For keeping her safe, you’re now an honorary police dog.”

GET OFF NOWby chirpy24124 hours ago

see my stepsister photos good dam …by kikofikra18 hours ago

Naira Marley reacts after school …by Chefee19 hours ago

rapper, Cardi B reacts after Nige …by Chefee19 hours ago