The Toronto van attack suspect was sexually frustrated and called for a “rebellion” by like-minded men just before he’s accused of plowing a rental van into pedestrians, killing 10 people — including at least one young woman.

Alek Minassian, 25, posted on his personal Facebook page that the “rebellion has already begun” for incels — someone who was involuntarily celibate — and hailed Elliot Rodger, a 22-year-old who killed six people in a 2014 vehicle and shooting rampage near the University of California, Santa Barbara.

“Private (Recruit) Minassian Infantry 00010, wishing to speak to Sgt 4chan please. C23249161. The Incel Rebellion has already begun! We will overthrow all the Chads and Stacys! All hail the Supreme Gentleman Elliot Rodger!” Minassian wrote in the post. 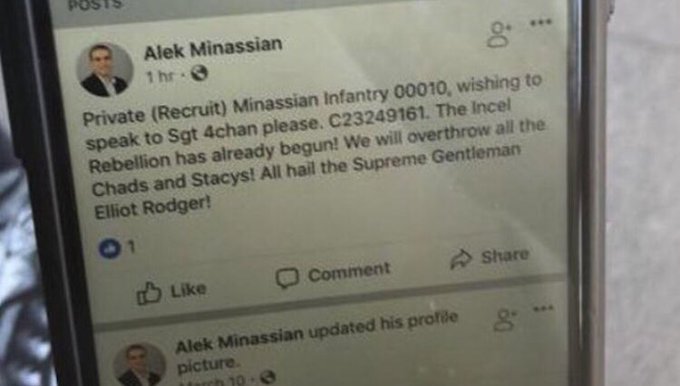 Rodger had referred to himself as an “incel” before carrying out the mass killing because he was sexually frustrated. He later committed suicide.

Facebook on Tuesday confirmed the message, posted early Monday just before the deadly attack, was made by Minassian.

Alek Minassian had called for an “incel rebellion” on Facebook moments before plowing his van into pedestrians Monday.

“This is a terrible tragedy and our hearts go out to the people who have been affected,” a Facebook spokesperson confirmed to Global News. “There is absolutely no place on our platform for people who commit such horrendous acts. We have found and immediately deleted the suspect’s Facebook account.”

In the post, which has since been removed, Minassian referenced overthrowing the “Chads and Stacys.” “Chads” are the men who are not rejected by women and sexually active while “Stacys” refer to the women who reject men. The attacker seem to use a code that was a unique identifier to a post on a 4chan subchannel for anime, the Globe and Mailreported. No post referring to the code was found.

Alek Minassian appeared in court on Tuesday and was charged with first-degree murder.  (Pam Davies)

Authorities are still determining the motive of the attack. People who knew Minassian described him as someone who “wasn’t overly social” and would often be alone.

“I remember seeing him probably just walking down the halls, usually by himself, or in the cafeteria by himself,” said Ari Blaff, who went to school with Minassian. “My memory is not perfect, but certainly, it would not be, I don’t think, a misstatement to say that he wasn’t overly social.”

Minassian, from the Toronto subarb of Richmond Hill, reportedly graduated from Thornlea in 2011, before attending Seneca College from 2011 to April 2018, Reuters reported, citing an Internet archived version of his Facebook page.

Minassian appeared in court Tuesday donning a white jumpsuit. He appeared to have no emotion in the brief court appearance as he was charged with 10 counts of first-degree murder and 13 counts of attempted murder.