Kate Middleton and Prince William welcome royal baby No. 3: Everything we know

Prince William and his wife, Duchess of Cambridge Kate Middleton, welcomed royal baby No. 3 on April 23 — and Brits are thrilled to greet the bundle of joy.

“Her Royal Highness The Duchess of Cambridge was safely delivered of a son at [11:01 a.m.],” a tweet from Kensington Palace revealed. “The baby weighs 8lbs 7oz. The Duke of Cambridge was present for the birth.”

The pair revealed their third pregnancy on Sept. 4, announcing the April 2018 due date about a month later, though they didn’t specify the exact day doctors predicted.

Kensington Palace confirmed at the time Middleton was suffering from severe morning sickness, known as hyperemesis gravidarum. The 36-year-old was affected by the same condition during her pregnancies with both Prince George, now 4, and Princess Charlotte, 2.

“The Queen and members of both families are delighted with the news,” Kensington Palace said in an October statement.

Middleton gave birth to a boy just weeks ahead of another royal occasion: Prince Harry and Meghan Markle’s wedding, an hour-long ceremony that will take place on May 19 at St. George’s Chapel at Windsor Castle in England.

Here’s what we know about the third royal baby.

What we know about the royal birth

“Parking Suspended” signs popped up along South Wharf Road outside of the hospital on April 9, announcing a suspension of parking through April 30, according to People. 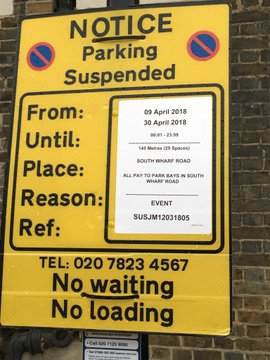 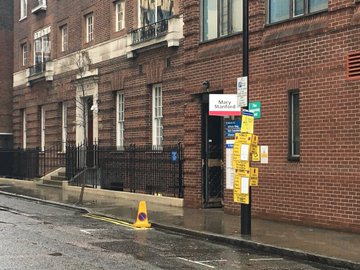 Countdown to Baby Cambridge #3 begins. The no parking signs are up outside the Lindo Wing of St. Mary’s hospital, Paddington, London where Kate will give birth later this month @people

The signs were similar to those that appeared roughly two weeks ahead of both George and Charlotte’s births, in 2013 and 2015, respectively.

KATE MIDDLETON STRESSES IMPORTANCE OF APPRECIATING ‘CHILDHOOD WHILE IT LASTS’

The Queen was the first to get a call about the safe arrival of George and Charlotte’s little sister or brother.

The parents were then given hours to bond with their child before making their way home. As they exited St. Marys, the pair paused for pictures and wave to crowds of people gathered around the gates of the hospital before taking off in a nearby car.

The pair welcomed their third child on St. George’s Day, the feast day of Saint George, a patron saint.

“While St. George never actually set foot in England during his lifetime, he was officially named the protector of the royal family and the patron saint of the country during the Middle Ages,” PEOPLE explained in a post online.

What we know about the baby’s name

The couple has stuck to tradition — naming their children after past or present royals.

“Alexander is believed to have been picked by the couple to honor the Queen, whose middle name is Alexandra,” People explained in a July 2013 post. “[The] name Louis ‘is a nice tribute’ to the Queen’s husband, Prince Philip, whose grandfather was Prince Louis Alexander of Battenberg.”

The name Charlotte Elizabeth Diana “pays tribute to Prince Charles, Kate’s great-grandmother Elizabeth, Her Majesty the Queen, and, most tellingly of all, William’s late mother, the Princess of Wales,” according to Vanity Fair.

Their third child will be known as His Royal Highness Prince Louis Arthur Charles.

The couple say they named their son Louis — pronounced LOO-ee — after William’s grandfather, Prince Charles, and the Duke’s mentor– Louis Mountbatten– who was killed by an Irish Republican Army bomb in 1979.

The Palace has announced all of the details of Middleton’s latest birth on its website and via Twitter, @KensingtonRoyal.

Charlotte just became the “first-ever member of the royal family that will not lose her spot in line to the throne if a male heir is born,” Evening Standard reports, explaining that the Succession to the Crown Act passed in 2013 makes this possible.

Prince Harry moved down to sixth in line behind his nephew.

Movie Download: Dannys Game (2020 …by Tbag Danny Bishop is a gambling prodigy. After exiling himself to p … Read More18 mins ago

“I only made the video because of …by ChefeeAdeyeye Babatunde, a final year student of the Lagos State Univers … Read More1 hour ago

Davido unfollows Peruzzi amidst r …by ChefeeRecord label boss, Davido, as at the time of filing this report, i … Read More1 hour ago

“You don’t know what God has done …by ChefeeA Nigerian guy on Facebook, Deary Hybee Moham took to his page to … Read More1 hour ago

The Powerful spritualist In Ghana
Accra
$500.00

The most powerful spiritual native doctor in Nigeria
Ijebu north
$1,500.00